Tech is flying high again in the Bay City, by some estimates higher than the Dot Com boom of the late 1990’s.

San Fransisco, California is fabled for various things through the ages, many being of the economic variety.  The California Gold Rush of the mid-nineteenth century caused what was a small town of 1,000 to balloon to over 25,000 people.  In the 1990’s it became one of the homes to the Dot Com boom when literally hundreds of tech startups were fueled by the excitement of a developing Internet and unchecked rivers of venture capital.  It also took a beating when that boom went bust. 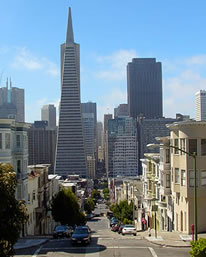 Today, tech remains an important part of the economy and is seeing an irrefutable re-emergence.  VC investment and IPOs are increasing.  Job growth is riding on the coattails of that influx.  The approximate peak of tech jobs in San Fransisco was 32,800 in Q1 of 2001.  After bottoming out in Q1 of 2004 at 17,100, the end of 2010 had it back up to 30,700.  Everyone in the industry says the numbers are assuredly higher now, potentially over the previous peak.

Just as telling is the office space getting snapped up.  Rents are climbing in Palo Alto, Cupertino and SoMa (South of Market) district, fueled by largely by news leases from tech firms.  According to real estate firm Jones Lang LaSalle, there was 2.5 million square feet of space already leased by tech since the start of 2010 and 90 companies are looking for 2.3 million square feet more.

Tech segments that were in comparative infancy a few years ago are leading the way, including social media, cloud computing, and mobile application development.  The price-to-earnings ratio shows a much more grounded perspective than what happened in the 1990’s, with tech companies today averaging 16 (versus a heady 70 before the bust).

It is clear that growth is strong in one modern-day’s IT haunts and hopes are that it will spill over into the greater job market nationally and internationally.  Early signs indicate upward trends all around with IT being a leading growth industry coming out of the down economy.

For those looking to ride the rising wave, investing in education for key areas like Android developer training, project management training, ITIL training, and networking training, there is sure to be an open market of job opportunities.

Tags: Application Development, ITIL, Job Market, Mobile, Networking, Servers and Networking
Category: Uncategorized
This entry was posted Wednesday, 11 May, 2011 at 2:46 pm
You can follow any responses to this entry via RSS.
Comments are currently closed, but you can trackback from your own site.

Welcome to IT CareerCast

We're keeping you updated on trends and things to come in the IT industry, in terms of job market and how it impacts your career. We also might have a little fun now and then. Do not miss this information - subscribe!

Sign Up to Preview Every Course & Receive Special Offers